"This thing of being a hero, about the main thing to it is to  know when to die." --Will Rogers 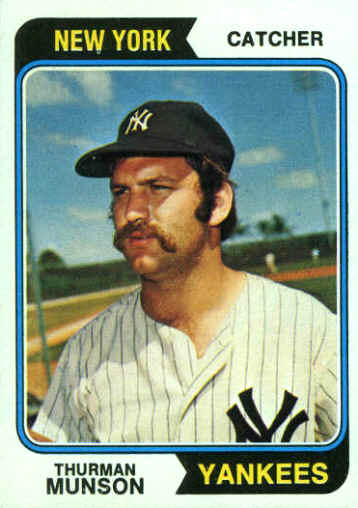 Thurman Munson spent the 1970s battling with Carlton Fisk and Johnny Bench for the title of best catcher in baseball.  Munson had grown up in Ohio, went to Kent State, and was drafted with the #4 overall pick of the 1968 draft.  Called up to the Yankees in 1970, he won Rookie of the Year honors while hitting .302 with seven home runs and 57 RBI.  Within five seasons he had helped lead the Yankees back to the top of baseball, as he again hit .302 with 17 homers and 105 RBI as the Yankees won their first pennant in a dozen years and Munson was named the AL’s Most Valuable Player. Amidst the turmoil of the Billy Martin-George Steinbrenner-Reggie Jackson soap opera that was the Bronx Zoo Yankees, Munson was the stabilizing influence, acting as team captain and handling a stable of talented pitchers built through both the farm system and free agency.
Munson loved his family, and he learned to fly so that he could go home on off-days to his wife Diane and their children in Ohio.  On August 2, 1979, Munson took his twin-engine Cessna Citation IS/P jet up to practice takeoffs and landings at the Akron-Canton airfield.  He invited along friends David Hall and Jerry Anderson; both were pilots and Hall was a flight instructor who had trained Munson for his instrument rating.

In the midst of a series of “touch and goes” Munson came down 1000 feet short of the runway on his third try. The little Cessna jet clipped a stand of trees, struck a tree stump, and burst into flames, killing the seven-time All-Star with two World Series Rings. Hall and Anderson survived the crash, suffering burns and abrasions; Munson’s death is generally attributed to asphyxiation which impeded his ability to escape the aircraft.
Thurman Munson’s jersey number (15) was retired by the Yankees, and a plaque to his memory is in Yankee Stadium’s Monument Park, reading “Our captain and leader has not left us, today, tomorrow, this year, next ... Our endeavors will reflect our love and admiration for him.”  An empty locker with his number still sits in the Yankees’ locker room.
So what happened? According to the National Transportation Board’s factual account:

On the third touch and go the aircraft was observed to touch down at near midfield … Hall stated that Pilot Munson had invited him to shoot a no flap landing and due to his lack of familiarity with the aircraft he had landed long. Pilot Munson made the third takeoff. For separation of other light and slow aircraft in the pattern the Air Traffic Control Specialist (ATCS) requested he fly a right downwind for Runway 19 (6398' 150") for traffic spacing. The passengers again reported a high downwind about 3500' m.s.l. at about 200 knots indicated air speed (KIAS). The downwind was reported to be wide. Mr. Hall estimated 3.5 miles west of the airport … Munson had not used a checklist on the previous approached but had extended the gear and flaps just prior to turning base leg. On this approach he reduced power to or about idle on the downwind to reduce airspeed/altitude and when the gear warning horn sounded manually shut the horn off. Turn onto base was also reported as further out than normal from the runway threshold. This may be attributed to the ATCS request to extend the downwind for additional spacing requirements. Neither passenger started to become apprehensive about the aircraft operation until beginning the turn onto final approach. At this time Mr. Hall, by reference to the red VASI display was aware that they were below the glide path and still descending while still some 4000 feet - 5000 feet from runway threshold. In addition he knew the gear was not extended and made a comment to Pilot Munson to that effect who immediately extended the gear which further increased the sink rate. No flaps were extended during this approach. Pilot Munson's hand then returned to the throttles which were "pretty well throttled back at that point" and he "sort of inched them forward and at that point I wouldn't feel or couldn't sense any response at all" (Anderson). Shortly after this Pilot Munson advanced the throttles full forward but Mr. Anderson states "Of course that's when our sink rate was pretty strong in coming out. I felt that the left wing dropped off as we sunk".

Thurman Munson had started flying about sixteen months before (February 1978) and was rated solo, instrument, and multi-engine.  He had accumulated about 480 total hours of flight time and about 428 hours in dual-engine or multi-engine craft. He bought the Cessna, tail number N15NY on July 6 1979.   The probable cause evaluation of the NTSB ascribed responsibility for the crash to Munson, citing

the pilot's failure to recognize the need for, and to take action to maintain, sufficient airspeed to prevent a stall into the ground during an attempted landing. The pilot also failed to recognize the need for timely and sufficient power application to prevent the stall during an approach conducted inadvertently without flaps extended. Contributing to the pilot's inability to recognize the problem and to take proper action was his failure to use the appropriate checklist, and his nonstandard pattern procedures which resulted in an abnormal approach profile.

Mechanical failure was not entirely ruled out by the investigation, but it was generally discounted.  Testing and examination of the engines indicated that “no preimpact mechanical defects were found that would have caused power interruption or spool up delay prior to accident occurrence.”
Posted by Keith Gaddie at 3:00 AM