The Iowa State University’s women's cross-country suffered a tragic blow when several team members perished when their flight crashed returning home in Des Moines, Iowa. Reports and eye witnesses recounted the plane clipped the top of tree and began to rip apart before bursting into flames and landing in a residential neighborhood in western Des Moines. All seven bodies on board were recovered which included four team members, a coach, a trainer and the pilot.
The flight was one of three returning from the NCAA national championship meet in Milwaukee where the team finished in second place. 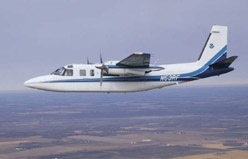 The plane, a Rockwell Aerocommander, owned by the university, went down in the middle of a freezing drizzle Monday evening. The crash cut power to 1,600 homes but there were no injuries from the residents.
All three planes were scheduled to land in Ames, Iowa but were diverted to Des Moines. One the runways at Ames other was covered with ice while another runway was under construction.
After the investigation, the NTSB concluded an acculamation of ice on the plane probably caused the crash. On its final approach, the pilot indicated he was encountering turbulence, then the plane made an unexpected 90-degree turn to the left.
A memorial service was attended by more than 6,000 people.
Posted by Keith Gaddie at 3:00 AM