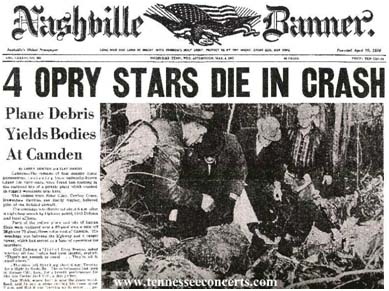 “Rollercoaster” does not come near enough to describing the life of legendary singer Patsy Cline. Growing up in poverty, reaching fame and fortune in her twenties, near bankrupt before the age of 30 only to have her career revitalized and on top the music world when it came to a sudden end in the eastern woods of Tennessee.


Cline grew up in Virginia and had to leave school at the age of 15 to help support her family when her father abandoned the family. She sang where ever she could, whether it was a local talent show or a high school dance.


It looked like Cline finally achieved success in 1957 after appearing on Arthur Godfrey's "Talent Scouts" show. Singing “Walking After Midnight,” the song became a hit and Cline a star. But her success was short lived and a few years later, facing bankruptcy, Cline signed a deal with Decca and recorded “I Fall to Pieces” and “Crazy” two of her biggest hits (“Crazy” was penned by outlaw country legend Willie Nelson).

Cline had a previous brush with death in June of 1961 when she and her brother Sam had a head-on car collision with another vehicle in Nashville. Cline was hurled through the car windshield but managed to survive. It was the second time Cline faced down death. Cline’s close to death calls first started at the age of 13 when she developed rheumatic fever. She was placed in an oxygen tent and at one point her heart stopped beating.


The circumstances surrounding Cline’s death are as tragic and suspenseful as the accident itself. On March 3, 1963, Cline was in Kansas City, Mo. performing a benefit concert for the family of a local disc jockey who had been killed in an auto accident. According to the website www.patsy.nu, Cline had a conversation with Ray Walker of the Jordanaires, a backup group for Elvis Presley, back in Nashville just before leaving for Kansas City. Ray said: "Patsy, honey", and she turned around, "be careful, baby, we sure love you...". And she was just starting to go down the stairs at the back entrance of the Ryman, and she turned her head over her shoulder and said: "Honey, I've been into two bad ones... The third one will either be a charm, or it'll kill me.”

Cline flew to the concert with her manager, Randy Hughes, in Hughes’ Piper Comanche. The plan called for Cline to fly in on March 3, spend the night and fly home the next day. But due to horrible weather, the flight was cancelled. The weather continued to stay in awful conditions on March 5 as Cline and Hughes waited out the rain at the airport. The story according to the website is that, during the wait, Patsy's friend Dottie West asked Patsy if she wanted to go back with her in the car. Cline seriously thought about doing so, but just before they departed, Hughes came around and said that he thought it was alright to fly.  Cline and Hughes, accompanied by fellow Nashville performers Cowboy Copas and Hawkshaw Hawkins, took off.


The plane made a stop in Dyersburg, Tennessee, 90 miles from Nashville. The website reported the airport manager asked Hughes if they wanted to stay the night but Hughes felt they could make it home. Hughes, 34, had a total of 160 hours of flying time and 117 in type,


The plane crashed right after take off, in a woodland area near Camden. The only remains found of Cline were her shoulders, the back of her head and right arm. Hughes and the two other passengers were also killed. According to the Civil Aeronautics Board investigation, the probable cause of the crash was “Noninstrument pilot attempted visual flight in adverse weather conditions, resulting in a loss of control.  Judgment of the pilot in initiating flight in the existing conditions.”  In other words, Hughes flew under conditions he was not qualified to fly in, and was overwhelmed by the weather.

But the tragedy didn’t end there. Country star Jack Anglin, of the duo “Johnny and Jack”, was killed on the way to her funeral.


Below is the brief of the Civil Aeronautics Board crash report; a full record of the investigation has not yet been located:


At 1705 c.s.t., the pilot landed N-7000P at Dyersburg, Tennessee to obtain weather information for the remaining portion of his flight from Kansas City, Missouri to Nashville, Tennessee.  The pilot received a thorough weather briefing based upon reports of existing and forecast terminal and area weather, current SIGMETs and current Advisories to Light Aircraft.  He was informed that the en route weather was unfavorable and the destination weather was below VFR minima with further deterioration indicated before any improving trends could be expected.  After receiving the weather briefing, the pilot talked with his wife in Nashville by telephone, and she informed him that the sun was shining in Nashville.  The pilot then indicated his intention to continue the flight and would return if he found it necessary.  Shortly thereafter, at 1807, the pilot taxied out and took off.  During taxi, the pilot was again furnished weather information by the tower operator.  After takeoff, there were no further radio contacts with N-7000P. About 1830, an aviation-qualified witness near Camden, Tennessee, heard the sounds of an aircraft flying at low altitude, and directed his attention in the direction of the sounds.  He then observed the aircraft as it descended out the the low overcast in an estimated 45° nosedown dive, and then heard a dull crash. Investigation revealed that N-7000P had crashed on a wooded, swampy area about five miles west of Camden.  Inspection of the wreckage disclosed that the aircraft was intact and the engine was developing substantial power at initial impact with trees.  There was no evidence of preimpact failure or malfunction.  Post-mortem examination of the pilot disclosed nothing that could have been a factor in the accident.  The weather at Camden was reported as Ceiling 500 feet; visibility 5 miles.


Cline was inducted into the Country Music Hall of Fame, a decade after her death, as the first female soloist chosen for the honor.
Posted by Keith Gaddie at 2:57 PM