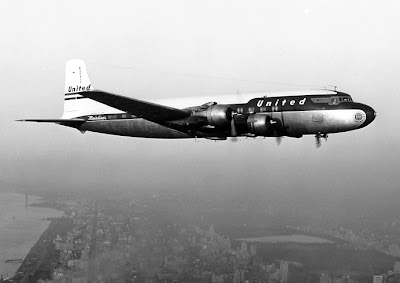 Flight 624 “Mainliner Utah,” had originated out of San Diego with stops in Los Angeles and Chicago.  The DC-6 was one of a new generation of pressurized passenger aircraft developed by the aviation industry in the 1940s. The flight was a “red-eye;” it departed California in the evening of June 16, and had flown across the continent, headed for LaGuardia Airport in New York City.
As was the case in the glamour-days of air-travel, the flight was carrying glamorous people. Earl Carroll was a Broadway original.  A songwriter, producer, and director, he had helped originate the Broadway “review” musical show complete with scantily clad dancing girls, and he also produced the first ever-Broadway show featuring totally-nude female dancers. Some of the most popular Broadway standards and scores of Broadways Golden Era also came from his pen. Carroll’s shows displayed the talents of Sophie Tucker, Milton Berle and Jack Benny.

The opening night of Earl Carroll's Sketch Book at the New Amsterdam Theater was quite memorable as Benny mades his Broadway debut. As recalled by the New York Times, “the show would be remembered for other reasons. Considered risqué for the day, the show is raided by police on the afternoon of the first matinee. There is grumbling from some of the clergy and press that Carroll has gone too far this time. Three police sedans with twelve patrolmen drive up to the West 41st Street entrance. A crowd of 1,500 gathers outside the theater. Seven warrants are served, but not until the show is over. A jury later finds the seven defendants not guilty.”
Also aboard was Beryl Wallace, Brooklyn-born dancer who rose to fame after being cast in Earl Carroll’s 1928 “Vanities” production.  She became the stable star at Carroll’s California- based dinner theatre and also his lover (that theater is now home to the Nickelodeon networlk).  She moved into film, performing in musical adaptations and also westerns, and was a radio variety show performer and hostess during World War II. Also on board were Venita Varden, a former Ziegfield Follies girl and ex-wife of longtime Hollywood character actor Jack Oakie; and the fashion editor for Collier’s magazine, Henry L. Jackson.

A business call the morning of departure nearly altered Carroll and Wallace's plans. Carroll reportedly let the decision of what to do rest solely on the flip of a coin. Beryl was the one who actually flipped it (at Earl's joking suggestion). Heads, they would stop in Detroit. Tails, they would stick to their original plan and go on to New York. The coin came down tails. It was a fateful gamble.
On descent for approach into LaGuardia, Captain George Warner and his flight crew noticed that the fire detection system indicated fire in the forward cargo hold.  The crew discharged the remote CO2 fire extinguishers, but failed to follow operating procedures which required first opening the cabin pressure relief valves.  The released CO2 made its way into the crew cockpit and passenger cabin, disorienting the flight crew. The craft entered a steep descent, flew just above tree level for some distance, averted striking the tall breaker building of a coal mine, and crashed into power lines outside Mount Carmel, Pennsylvania. At 12:41 PM Eastern Time, the DC-6 burst into flames and came to rest in the woods. Warner was evidently trying to make a local regional airstrip. The CAB investigation indicated that the probable cause of the crash was “incapacitation of the crew by a concentration of CO2 gas in the cockpit.” At the time it was the fourth-worst passenger airplane crash in US aviation history. Even though it was equipped with 4-Pratt & Whitney R-2800 engines, the aircraft had a recent history of engine fires. Although this particular plane had received special modifications mandated by the FAA, the repair itself had problems with CO2 fumes leaking into the pilot's cabin. In the final hours of the 12-hour flight just past Phillipsburg, Pennsylvania, the radio operator made a frantic call about the plane making an emergency decent. Witnesses reported smoke pouring from one of its left engines with the landing gear still retracted. It struck a power transformer and clipped a high tension wire, turning the plane into a fireball. The DC-6 disintegrated on impact at 12:41 PM EST on June 17, 1948.
It was an incredibly destructive crash –definitive remains were identified for just 16 of 43 persons aboard. Among the debris of the crash, which were strewn across a 1000-foot wide area, was a script for a proposed film titled “The Sky’s the Limit” that Wallace was reading.
The Civil Aeronautics Board had grounded all Douglas DC-6s during the winter of 1947-48 after the crash of United Airlines flight 608 resulted in the death of all 52 persons aboard. The flight 608 crash had been attributed to a design flaw in the fuel system that led to a similar fire. The fatal crash of UA flight 608 caused a redesign of the DC-6 to incorporate the CO2 fire suppression system.
Posted by Keith Gaddie at 3:00 AM