The statement below was drafted by several professional political scientists, regarding the candidacy of Prof. Tom Brunell for Deputy Director of the US Census. Prof. Brunell has been the subject of speculation and criticism for the past couple of months, including criticism of his scholarship, his work in redistricting litigation, and his administrative qualification for the position at the census. The following represents our professional assessment of Prof. Brunell based on his extensive academic record, his two decades of experience working with institutional data and his service as a college administrator.

Professor Thomas L. Brunell at the University of Texas at Dallas is being considered for Deputy Director of the US Census.  Professor Brunell is a prominent and highly qualified political scientist.  He is an exceptional scholar who in the last twenty years has produced over 60 publications, many of which appear as peer reviewed articles in some of the leading journals in the discipline. His applied and scholarly research often relies on US Census data and when he was a Congressional Fellow he worked on the committee that oversaw the US Census.  He also has experience as an administrator as a Senior Associate Dean and Director of Graduate Studies.

His book, Redistricting and Representation: Why Competitive Elections are Bad for America, has a provocative title and provocative conclusions, but, in fact, asks and answers a rather simple and mainstream question about the relationship between more homogeneous districts and citizen satisfaction with their member of Congress and the institution of Congress.  He finds that citizens are much more satisfied with their representation when they live in more homogenous districts than when they live in more heterogeneous ones.  While most American political scholars believe and argue that electoral competition is critical to a healthy society, Professor Brunell’s book raises important questions that challenge conventional assumptions and expand our understanding about how institutional design (electoral districts) shapes political attitudes.  Some of us have even assigned his book to our students to read even though we do not agree with all of its conclusions.

In response to criticism regarding Professor Brunell’s academic rigor and politics, we the undersigned, fellow academics who are familiar with the work of, who have worked with, and in some cases co-authored with Professor Brunell, want to acknowledge the overall high quality of his academic record and his experiences working with institutional data.  Together we represent different political, ideological, and party preferences, but nevertheless agree that our personal and professional knowledge of Professor Brunell indicates he is a man of high standards, hard work, and strong ethics. 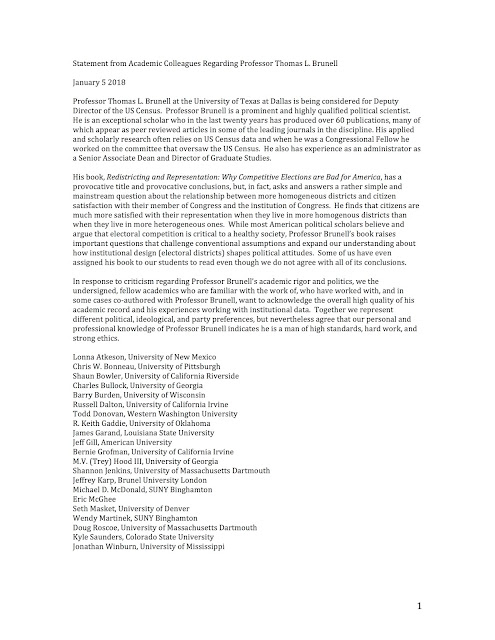